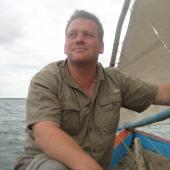 Stephen Lubkemann (Ph.D., Brown University, 2000) is Associate Professor of Anthropology, International Affairs, and Africana Studies at The George Washington University, and is the Acting Director of the GWU Diaspora Research Program. He is also a former Research Associate at the Smithsonian Institution National Museum of African American History and Cultures, and a founding member of the GW-Capitol Archaeological Institute, where he coordinates all maritime and underwater archaeology initiatives.

As a maritime archaeologist and scholar of heritage, he has collaborated frequently over the last two decades in maritime archaeology research with the U.S. National Park Service Submerged Resources Center, as well as other partners, including the Bermuda Maritime Museum, Brown University, EARTHWATCH, Biscayne National Park, and the Southeastern Archaeological Center. He has conducted maritime archaeological fieldwork primarily in North America and Africa. In 2008 he co-founded the Southern African Slave Wrecks and Diaspora Heritage Research Project, renamed the Slave Wrecks Project in 2014, and has served as the International Coordinator for the project since its founding.

As a cultural anthropologist he has conducted research on a variety of topics including historical and contemporary diasporas and displacement; development; policy; and heritage. He has conducted ethnographic fieldwork and archival research in Mozambique, South Africa, Liberia, Angola, Ghana, the United States, and Portugal. His 2008 book examining the social effects of the Mozambican civil war (Culture in Chaos, University of Chicago Press) was a finalist for the Herskovits Award of the African Studies Association. He has published dozens of peer-reviewed articles and book chapters, and co-edited four peer reviewed volumes.