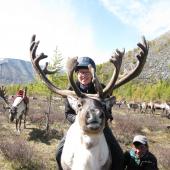 Paula T. DePriest is the Deputy Director of the Smithsonian’s Museum Conservation Institute. Previously she was a scientific advisor in the Office of the Under Secretary for Science at the Smithsonian Institution, and a research scientist and curator of the Lichen Collection at the Department of Botany of the National Museum of Natural History. She is a member of the Smithsonian Institution’s multi-disciplinary American-Mongolian Deer Stone Project, and a board member of the Mongolia Society and the American Center for Mongolian Studies. She works with Mongolian and international partners to protect archaeological, cultural heritage, and ecological resources across Mongolia.

Paula has held positions as Adjunct Professor at Duke University (1997-2004) and George Mason University (1998-2004). She served as Chair of the Smithsonian Congress of Scholars (2001-2002) and Chair of the National Museum of Natural History Senate of Scientists (1999) at Smithsonian. She was elected a Fellow of the American Association for the Advancement of Science in 2002. Paula’s biological research focuses on lichens (lichen-forming fungi), especially reindeer lichens in the reindeer herding regions of Mongolia. Her conservation research focuses on fungal and lichen biodeterioration of outdoor monuments. In addition to Mongolia, her research and fieldwork has taken her throughout Europe, the Scandinavian countries, and Central and South America. Paula’s early lichenological studies were conducted in the Southern Appalachians and Southeastern United States. Her research has been published in over 90 professional papers, and has been featured in various journals and newspapers

After traveling by horseback across northern Mongolia, she has become an avid horse rider.