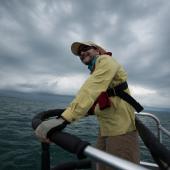 A staff scientist at the Smithsonian Tropical Research Institute since 1994, Hector Guzman received his PhD in biology from Newcastle University, United Kingdom, and has published more than 160 scientific papers related to the ecology and monitoring of coral reefs, ocean conservation, marine mammals, and the impacts of coastal pollution. His studies of Central American marine species and habitats help equip policymakers and partners with solid science for developing stronger conservation approaches in sensitive natural areas.

Hector has been central to the effort in Panama to create restricted shipping lanes through the Gulf of Panama to and from the Panama Canal, with the goal of protecting the thousands of breeding humpback whales that come annually to calve and raise their young. He is also collaborating closely with scientists and policymakers from Ecuador to Chile to build a corridor of protected routes for whales along the coasts of South America.

Despite living and working in the tropics, Hector loves alpine skiing, an activity he undertakes only on rare vacations. In his spare time he gardens and watches science-fiction movies.

The Cayos Cochinos Biological Reserve is a biological reserve created in 1993, encompassing a 460-square-kilometer (184-square-mile) area on the Caribbean coast that includes two forested islands and 12 sand keys, as well as surrounding coral reefs, seagrass beds and other underwater habitats. The Honduran Coral Reef Foundation requested the Smithsonian Tropical Research Institute (STRI), based in Panama, provide scientific and monitoring expertise for the Los Cochinos Archipelago. STRI started the project in June 1994.