Phytoplankton, the legion single-celled plant wanderers of the planet’s oceans, are the hidden foundations of sea and sky. They form the basis of many marine food webs and are also important oxygen producers and veritable carbon sponges.

Phytoplankton and marine plants produce 50 percent of the world’s oxygen through the process of photosynthesis. Phytoplankton also play a critical role in the oceans’ ability to transfer an estimated 5 to 15 gigatons of atmospheric carbon dioxide from surface to interior every year.

Yet phytoplankton are fragile, easily damaged by overexposure to ultraviolet light. As warmer global temperatures bring stronger, more frequent storms, phytoplankton are churned toward the surface more often, increasing their exposure to DNA-damaging UV rays. Sunburned phytoplankton do not photosynthesize properly, resulting in a reduced ability to release oxygen and absorb carbon. This has a detrimental global impact in light of research that suggests that the ocean carbon cycle may remove as much as half of all human-produced carbon dioxide emissions from the atmosphere.

Smithsonian photobiologist Pat Neale has studied photosynthesis in plankton for more than 30 years, both at the Smithsonian Environmental Research Center (SERC) on the Chesapeake Bay in Maryland as well as in the waters around the Antarctic continent. His work helps set a baseline for how different levels of UV exposure reduce, or inhibit, photosynthetic systems of phytoplankton, and therefore their efficacy as oxygen producers and carbon absorbers. 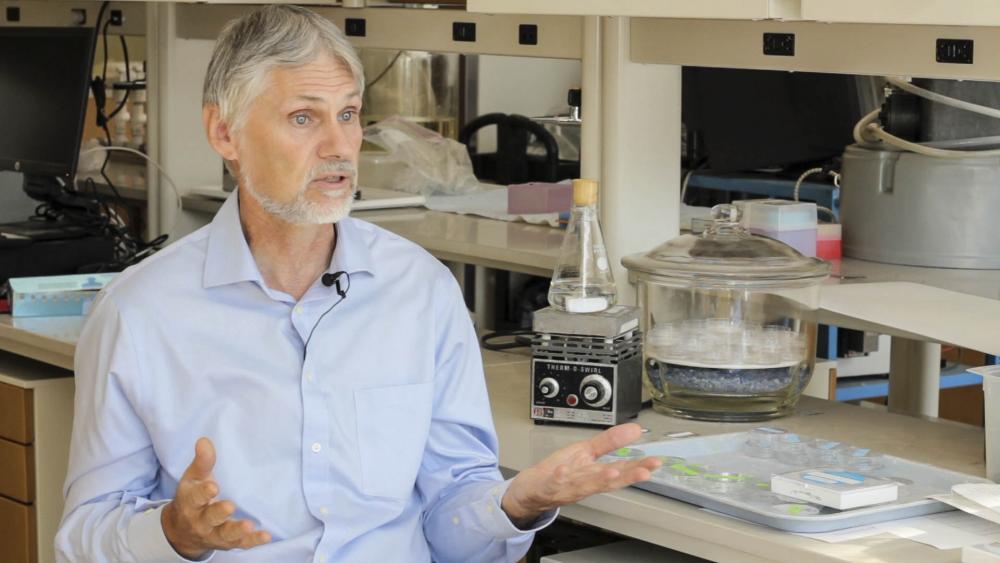 “The poles have a lot of interest from people who are interested in global climate change because they are the first responders, as they’re at the edge of the climate,” Pat says. “Changes will affect those areas first. Our experiments were directed towards getting a better idea of how UV is affecting polar phytoplankton, and their productivity in the Antarctic.”

Phytoplankton occupy a relatively narrow layer beneath the ocean surface, varying in depth from a few meters in turbid coastal water to hundreds of meters in the clear mid-ocean. Much of this layer is deep enough to protect them from UV rays. Ocean mixing, or the vertical churning of deep waters as wind blows across Earth’s surface, is a normal marine process, and plankton are adapted to repair moderate levels of UV damage acquired through regular exposure. But as changing weather patterns and altered ocean mixing lift plankton to the surface more often, their repair and photosynthesis mechanisms become impaired.

“If stirring happens often enough that they don’t have time to recover before another exposure occurs, it can intensify the inhibition effect,” Pat says. “Supercomputer models allow us to very realistically simulate the motion occurring in the surface mixed layer that the plankton inhabit in a way that we can’t do in real life, because we can’t tag phytoplankton to see what happens to individual cells.”

Partnering with John Cullen and Michael Lesser at the Bigelow Laboratory for Ocean Sciences in Boothbay Harbor, Maine, Pat developed an experimental apparatus known as a photoinhibitron. Known around the lab as “the Beast,” it simultaneously exposes 120 different samples of phytoplankton to varying levels of ultraviolet radiation—previous methods allowed for only a handful of samples to be irradiated at a time. Over much iteration, Neale has created a vast database of known exposure effects that he and other researchers can compare against field measurements. And one of the best places to look at phytoplankton is in one of the planet’s most extreme environments: Antarctica. 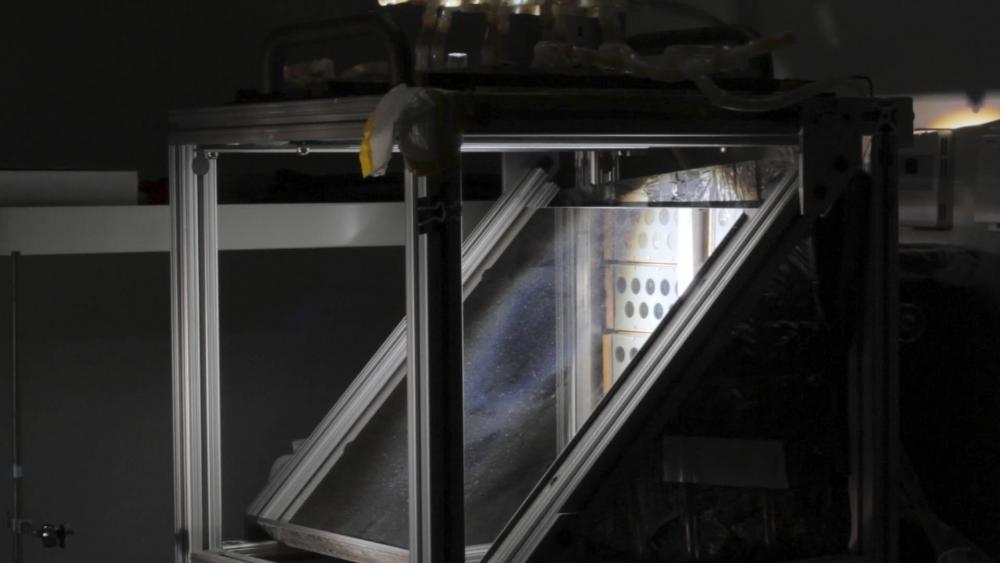 This frozen continent and its oceans have long been a destination for international research on phytoplankton. Designated by international treaty as a scientific research asset, the waters there contain some of the highest phytoplankton concentrations in the world due to nitrogen, phosphorous and iron accumulation from global ocean currents. Seasonal plankton blooms produce vast amounts of oxygen and consume equally vast amounts of carbon.

From research stations in New Zealand, Chile and Argentina, as well as aboard the National Science Foundation’s icebreaker, Nathaniel B. Palmer, Pat has been collecting samples and running tests in the Antarctic’s Ross Sea since the 1990s. His most recent expedition in 2006 added another layer of field results that, along with ongoing lab work, have enabled the development of mathematical models that predict different levels of phytoplankton activity just by using measurements of UV levels in the atmosphere. 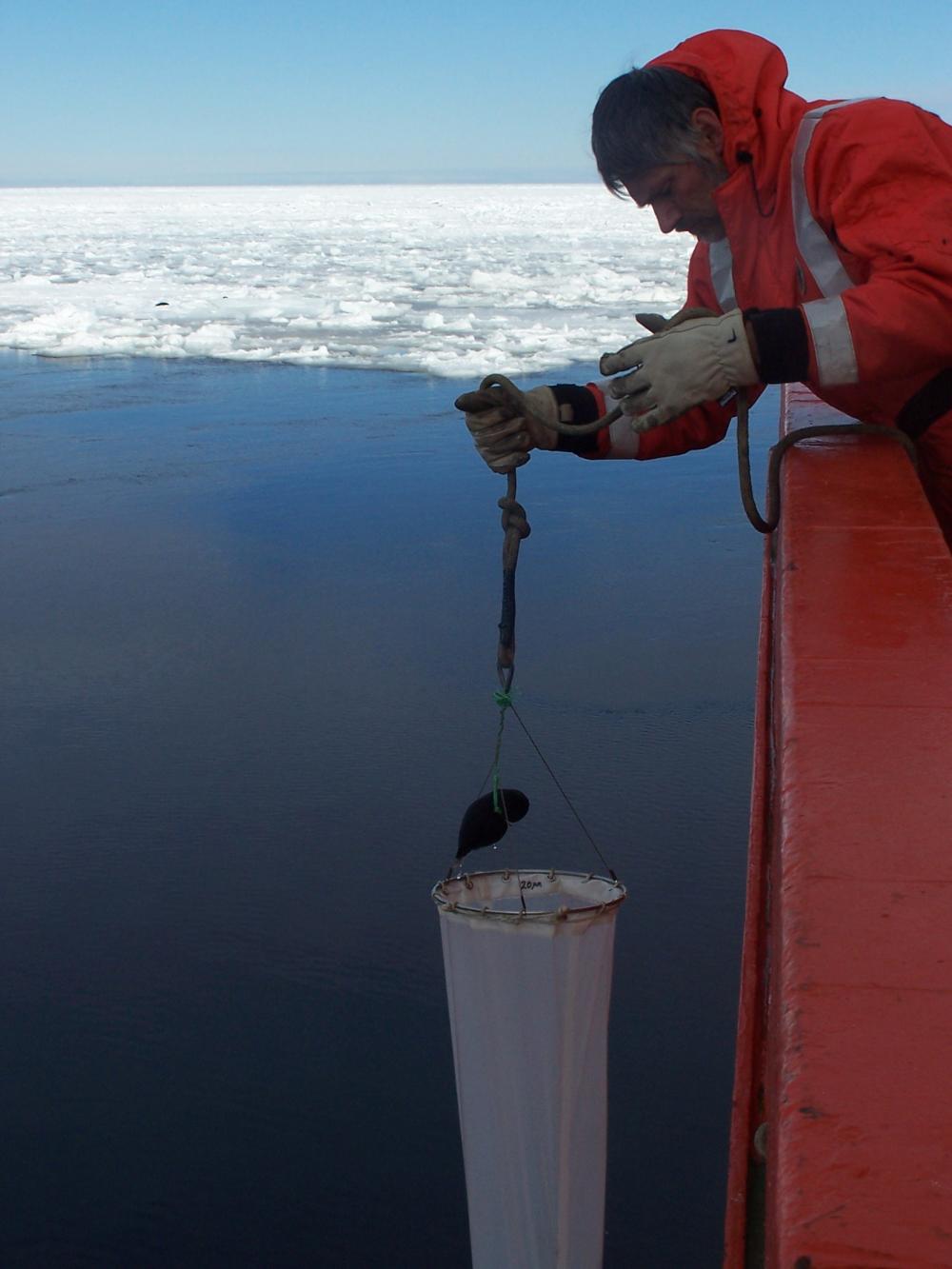 Aboard the Palmer, scientists from several other nations were able to use three of Pat’s photoinhibitron devices to conduct research for their own studies. Continued cooperation between scientists of all nations is essential to conducting research like Pat’s, which has truly global implications.

The ability of phytoplankton and other marine plant life to help remove carbon from the atmosphere is known as the biological carbon pump, one of several chemical and biological processes that interact to drive the ocean carbon cycle. To remove and sequester carbon, phytoplankton draw dissolved carbon dioxide out of seawater and, through photosynthesis, split up the carbon and oxygen molecules. The plants release the oxygen, but use the carbon molecules to maintain and replenish cellular structures. Some carbon moves up the food chain as animals consume the plankton, but much of it falls to the seafloor as waste. 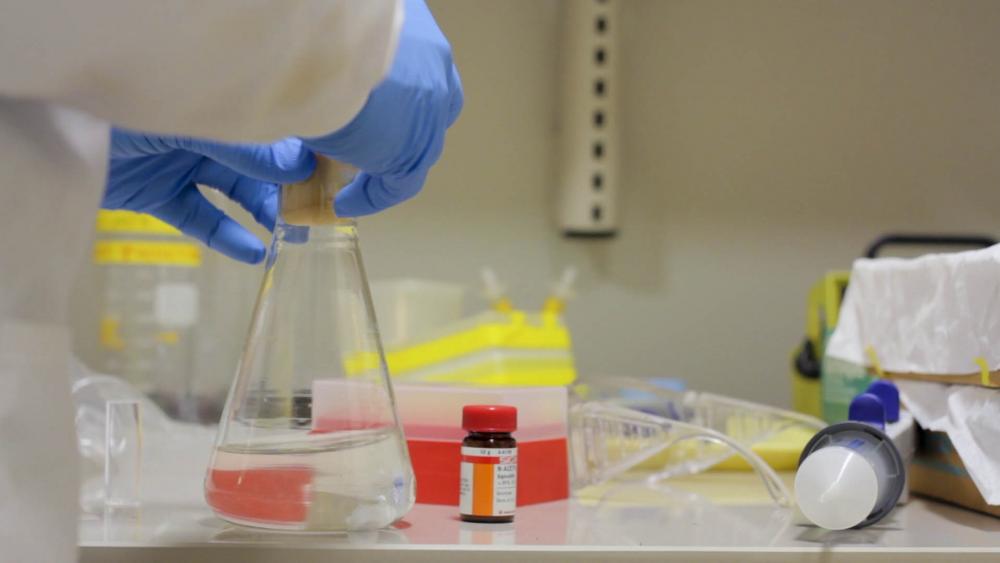 “The ocean absorbs carbon dioxide, but it’s just dissolved in the water. Even if you could magically decrease carbon dioxide in the atmosphere, the ocean will fill it back up,” Pat says. “The only way to get carbon dioxide out of the ocean is to put it into something that will sink and be buried in the sediment.”

But as carbon dioxide levels in the atmosphere increase, ocean acidity does, too, which may further limit phytoplankton’s ability to remove atmospheric carbon dioxide.  Pat’s work helps shed light on factors that may contribute to reduced carbon cycling in the oceans.

“The response of phytoplankton in the ocean is very important because it’s involved in the carbon cycle, which helps regulate the atmosphere,” Pat explains. “Any change in the productivity of phytoplankton will have some consequences. We don’t know exactly what they are, but our contribution is improving the understanding of how phytoplankton respond to different factors.”

Smithsonian researcher Patrick Neale and his lab at the Smithsonian Environmental Research Center are studying UV impacts on phytoplankton in the Antarctic oceans to help create models of how phytoplankton respond in various scenarios of climate change.