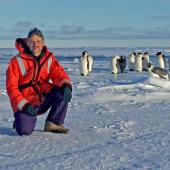 In the frigid waters around Antarctica and in a much more temperate laboratory in Edgewater, MD, photobiologist Pat Neale studies the effects of light on living organisms, particularly the effects of solar ultraviolet radiation (UV) on phytoplankton. His interest in the long-term variations of UV from the sun, how UV transmits through water and how it affects marine life translates into the development of models for predicting the impacts of climate change on a critical component of the Earth’s carbon cycle.

Aboard the National Science Foundation icebreaker Nathaniel B. Palmer in Antarctica and in his Maryland lab, Pat uses an instrument developed and constructed at the Smithsonian to measure the varying levels of UV that can penetrate the ocean and affect phytoplankton. His work in polar radiation and UV radiation monitoring feeds into the U.S. Interagency Ultraviolet Radiation Monitoring Network, which tracks the variation of short (UVB) and long (UVA) wavelength radiation and supports research on their effects.

Pat received his bachelor’s degree in environmental science from the State University of New York in 1976, followed by a master’s in statistics from Columbia University in 1981 and a doctorate in aquatic ecology from University of California, Davis, in 1985. His first field expedition to Antarctica was in 1989, and he most recently visited in 2006. He continues to study Antarctic productivity by integrating data accumulated from field campaigns into mathematical models. He has published over 100 papers related to his work in journals including Science, Nature and Limnology and Oceanography.

Pat likes to listen to and perform music of all kinds; plays keyboard in the SERC Band "The Muddy Creeks"; and, for a while, majored in music composition in college.

Smithsonian researcher Patrick Neale and his lab at the Smithsonian Environmental Research Center are studying UV impacts on phytoplankton in the Antarctic oceans to help create models of how phytoplankton respond in various scenarios of climate change.