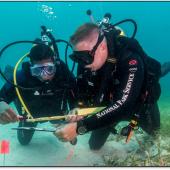 Following years of diving and research on the shipwrecks of the Aegean, Dave took a job as an underwater archeologist for the United States Navy. While with the Navy he helped plan and execute the recovery of the world’s first successful combat submarine, the Confederate submersible H.L. Hunley, lost off the coast of Charleston, South Carolina in 1864.  Following the Hunley project, Dave moved to Santa Fe to join the National Park Service’s Submerged Resources Center, of which he is the current chief, and continue diving on shipwrecks around the country and around the world. He has been a technical diver since 2002 and a rebreather diver since 2006.

Projects Dave has worked on include the search for John Paul Jones’ ship, Bon Homme Richard; diving the wreck of a B-29 Superfortress that crashed into Lake Mead while doing top-secret high altitude research for the U.S. Air Force; diving on the wreck of the USS Arizona in Pearl Harbor, Hawaii; working with Ellis Island to document and preserve portions of the historic ferry Ellis Island; assisting an international team with the study and documentation of the wreck of the RMS Titanic; and assisting the government of Mozambique in the creation of national parks to preserve historic shipwrecks and sensitive ecological areas off the African coast.