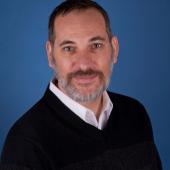 Since 2007, historian and curator Paul Gardullo has worked towards building the collections and exhibits for the Smithsonian’s 19th and newest museum, the National Museum of African American History and Culture (NMAAHC), opening on the National Mall in Washington D.C. in 2016. His research interests are broad-ranging, but relate to African-American history and culture, slavery in American cultural memory, public history, and the African Diaspora.

After receiving his undergraduate and master’s degrees from Rutgers University in 1986 and 2001, he went on to earn his doctorate degree from The George Washington University in 2005, and in 2006 joined Yale University’s Gilder Lehrman Center for the Study of Slavery, Resistance, and Abolition.

As the Smithsonian’s representative to the Slave Wrecks Project, Paul contributes to planning, research, and operations that advances maritime archaeology research, but also builds the relationships between the national and international stakeholders in the project. His focus on museum interpretation of the histories and objects of slave ships like the São José helps shape how these relics and stories can be brought to a wide public audience.

Between his undergraduate and graduate education, Paul spent time in Salvador, Brazil to study Capoeira Angola, the practice and understanding of which helps him better appreciate the African Diasporan cultures.