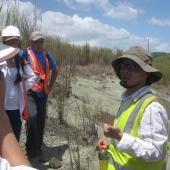 Aldo Rincon studies the origins and evolution of New World Tropics terrestrial biodiversity. His research combines geology and paleontology to identify paleobiogeographical patterns among terrestrial communities in tropical and subtropical areas of North America. Although his research interests also include Paleocene-Eocene (55-60 million years ago) fossil assemblages from South America, his doctoral research focuses on the paleobiogeography, paleoecology, and biostratigraphy of the earlier terrestrial communities that colonized volcanic terrains of Panama 21 million years ago. During this time a dramatic faunal and climatic turnover experienced worldwide led to the appearance of modern groups such as camels and horses in the New World Tropics.

Aldo is a Colombian geologist who received his MSc from the University of Florida in Geology and Paleontology in 2012, and now is a Doctoral Candidate and Research Assistant in the Florida Museum of Natural History.

When Smithsonian paleobotanist Carlos Jaramillo learned that Panama was expanding its canal in 2006 and blasting 100 million tons of rock to do so, he knew he had to move fast to access all of the fossils that this blasting could uncover. Carlos’ research from this site has led to a new understanding of how species spread across the Americas.