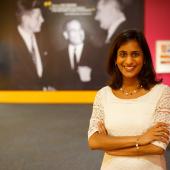 Dr. Masum Momaya has over 20 years of experience working for women’s rights, gender, race and class equality, and social justice. She is a former Museum Curator at the Smithsonian Asian Pacific American Center, and her curatorial portfolio includes two online multimedia, multilingual exhibitions; a community-based exhibition at a local museum; a solo artist exhibition; and a commissioned multiple artist, themed exhibition.

Her most recent exhibition, Beyond Bollywood: Indian Americans Shape the Nation, showed at the National Museum of Natural History from 2014-2015 and is currently traveling around the United States and India. Formerly, Dr. Momaya has done curatorial work at the International Museum of Women in San Francisco and the Indo-American Heritage Museum in Chicago. She has also served as lead researcher and writer of the Association for Women’s Rights in Development and on the boards of the Third Wave Foundation, Amnesty International’s Women’s Human Rights Program, and the Women’s Intercultural Network.

Her more than 100 articles, podcasts, and exhibitions have been translated into more a dozen languages.

Dr. Momaya earned an honors BA in Public Policy and Feminist Studies from Stanford University and a master’s degree in Education and a doctorate (EdD) in Human Development from Harvard University. She is a graduate of the Coro Fellowship in Public Affairs in San Francisco and has conducted research at the Centre for Development Studies at Oxford University.

Traveling "Beyond Bollywood" to India   Active