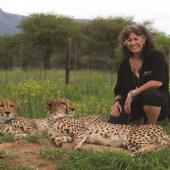 Dr. Laurie Marker is a research scientist and conservation biologist recognized as one of the world’s leading experts on cheetahs. As Founder and Executive Director of Cheetah Conservation Fund (CCF), Dr. Marker has pioneered research, established conservation models and created cooperative alliances on behalf of the cheetah that never before existed. Under her leadership, CCF has grown into a world-class cheetah research, education and conservation institution that is now the longest-running and most successful cheetah conservation program in the world.

Before CCF, Dr. Marker was Executive Director of the Center for New Opportunities in Animal Health Sciences at the Smithsonian Institution. Dr. Marker earned her DPhil in Zoology from Oxford University, and in 2014, she became an A.D. White Professor-at-Large with Cornell University. Dr. Marker has been awarded the Tyler Prize for Environmental Achievement (2010), The Tech Museum of Innovation’s Intel Environmental Prize (2008), and was declared a Hero for the Planet by TIME Magazine (2001).