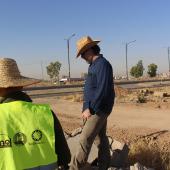 Brian Michael Lione is the International Cultural Heritage Protection Program Manager at the Smithsonian’s Museum Conservation Institute (MCI). Mr. Lione leads the implementation of several Smithsonian projects in Iraq, including as a coordinator and instructor for courses at the Iraqi Institute for the Conservation of Antiquities and Heritage (IICAH) in Erbil, and on site in Mosul and Nimrud. His current focus at MCI is the sustainability of the IICAH. Prior to coming to the Smithsonian and MCI, he helped establish the IICAH and worked as Director and Executive Director of that organization from 2009-2017. Brian spent the first decade of his professional career managing heritage sites and policy for the Department of Defense, culminating in his position as the DoD’s first Deputy Federal Preservation Officer from 2005-2008. Lione is an Army intelligence veteran, having served in active and reserve capacities in the US and throughout the Middle East. Brian is an active Trustee of the US National Committee of the International Council on Monuments and Sites (US/ICOMOS), where he chairs their International Exchange Program Committee and manages an annual cohort of over a dozen emerging professionals in heritage preservation from the US and around the world. Mr. Lione holds undergraduate and graduate degrees in historic preservation from the Mary Washington College (1999) and Goucher College (2004), respectively.