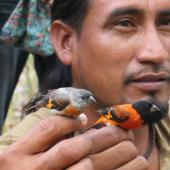 The Red Siskin Initiative (RSI) is an international collaboration between Smithsonian scientists and international partners that was formed to conserve populations of the endangered Red Siskin (Spinus cucullatus) in Venezuela and Guyana. Leveraging the iconic status of this species, RSI now also works to broaden conservation impacts to benefit other resident and migratory species and large areas of threatened tropical habitat, including shade coffee plantations that the RSI is helping to achieve Smithsonian Bird Friendly Coffee certification.

Until recently, the historic range of the Red Siskin was only known to include eastern Colombia, much of northern Venezuela, and the island of Trinidad. In 2000, a previously undocumented population of Red Siskins was discovered in remote southern Guyana on an expedition led by ornithologists Mike Braun of the National Museum of Natural History, and Mark Robbins, University of Kansas. Red Siskins have also been found in Cuba and may still persist in Puerto Rico, where RSI is actively searching for the species.

The species is threatened mainly by unsustainable harvest for the illegal pet trade, as well as habitat loss. In Venezuela, what had been the largest population has been reduced to just a few fragmented flocks that may number less than 1000 individuals total. The Red Siskin is protected worldwide by the CITES Appendix I, in the United States by the Endangered Species Act, and in Venezuela and Guyana by national legislation.

In 2015, the informal group co-founded by Mike Braun and Kathryn Rodríguez-Clark, formerly affiliated with Instituto Venezolano de Investigaciones Científicas in Venezuela and now a population ecologist at the Smithsonian National Zoo and Conservation Biology Institute, formally became the Red Siskin Initiative, accompanied by an outstanding team of Venezuelan, Guyanan, and US scientists and collaborators. Some key partners include the South Rupununi Conservation Society in Guyana and, in Venezuela; NGO Provita, the Instituto Venezolano de Investigaciones Científicas, Bararida Zoo in Barquisimeto, and Leslie Pantin Zoo in Turmero, where a dedicated Red Siskin Captive Breeding and Integrated Conservation Center is currently under construction. The RSI also works closely with aviculture clubs and private breeders across the globe who are passionate about the Red Siskin and dedicated to helping recover wild populations through collaborative breeding, education, and outreach.

The ultimate goal is to restore self-sustaining populations that will thrive and expand naturally without the need for intensive conservation management. Moreover, the RSI aims to make the Red Siskin a symbol of Venezuela and Guyana’s commitments to preserving their natural heritage, one that will inspire more conservation action in the region and across the planet.