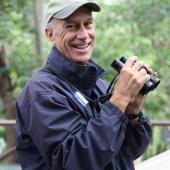 A research scientist in the Department of Vertebrate Zoology at the National Museum of Natural History, Mike Braun grew up in Houston, Texas, enthralled by the natural wonders of the Texas Gulf Coast and Hill Country. He kept all manner of exotic animals as a boy, including tropical fish, snakes, turtles and hawks. He began birding in high school, and roamed Texas and Mexico with family and friends of the birding community. His love of nature led him to study science as an undergraduate at Cornell University, and to pursue a doctorate on the evolutionary genetics of birds at Louisiana State University. After postdoctoral studies at the National Cancer Institute and a year on the faculty of the University of Cincinnati, Mike moved to the Smithsonian Institution where he founded the Laboratory of Molecular Systematics.  His research employs genomic tools to explore the evolutionary relationships, diversification processes and conservation biology of birds and other organisms. Mike has led birdwatching tours to North and South America since his days in graduate school, and loves to share his knowledge of nature and science with others. Mike is also an Adjunct Professor of Biology at the University of Maryland, an affiliation which brings graduate students into Smithsonian research.