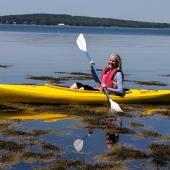 Kathryn Rodriguez-Clark is a Population Ecologist in Animal Care Sciences at the Smithsonian National Zoological Park & Conservation Biology Institute.  She is also a Research Associate at the Venezuelan NGO Provita, and Affiliate Faculty in the Department of Biology at George Mason University. Kate earned her PhD from Princeton University and until recently worked in Caracas as an Associate Investigator in the Population Ecology and Genetics Lab of the Ecology Center at the Instituto Venezolano de Investigaciones Científicas (IVIC), where she started as a post-doc in 2002. At IVIC, she co-founded a core molecular lab and the Red Siskin Initiative, supervised students, taught classes, chaired graduate studies, and served on the animal ethics board. Her research focused on using fieldwork, modelling, and genetics to address conservation challenges faced by a variety of species and ecosystems threatened by human overuse.

At the Smithsonian's National Zoo, she collaborates with staff in population management, and has expanded her research to include the demographic and genetic challenges faced by ex situ populations, as they are managed with in situ populations to meet conservation goals. She is particularly interested in the challenges presented by species managed as groups, which have received far less attention to date than those managed as individuals. A dual citizen of the US and Venezuela, Kate enjoys teleworking from her home in Boston, taking frequent train trips to DC, and moonlighting as a soccer mom.

The Red Siskin, Spinus cucullatus, is an endangered bird from northern South America that is threatened primarily by wildlife trafficking for the pet trade and habitat loss.