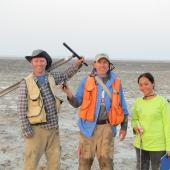 A member of the Blue Carbon Initiative’s Scientific Working Group since 2011, Pat is also active in several additional working groups to advance scientific questions that are critical for understanding how tidal wetlands store and preserve carbon. In 2013, he collaborated on a project in Abu Dhabi to quantify the carbon storage capacity of tidal wetland systems, or “blue carbon” pools.

Pat developed a love of wild places during childhood camping trips. He says, “I fell in love with soils later when I learned that they are the most important part of these beautiful and fascinating ecosystems. There wouldn't be a forest or wetland to camp in without the soil beneath the landscape.”

In addition to his scientific research at the Smithsonian Environmental Research Center (SERC) and his role in international blue carbon working groups, Pat is also committed to public education.

As a way of sharing his passion for soils with a broad audience, he was lead curator for Dig It! The Secrets of Soil, at the National Museum of Natural History (NMNH), which was on display at NMNH before beginning a major U.S. tour.

Pat’s tour of Dig It! can be viewed here:

Smithsonian scientists are working to advocate for mangrove conservation by quantifying the role these coastal forests play in climate mitigation.