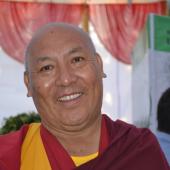 Ven. Geshe Lhakdor has served His Holiness the Dalai Lama as his translator and religious assistant since 1989. A distinguished Buddhist scholar, Geshe Lhakdor was the English translator for His Holiness, the 14th Dalai Lama, from 1989 to 2005. He has co-translated and co-produced several books by the Dalai Lama. As Director of the Library of Tibetan Works and Archives in Dharamsala, Geshe facilitates the Science for Monks program and shares his own expertise as a scholar of science and philosophy. Geshe is a trustee of the Foundation for Universal Responsibility, established by His Holiness. He is also the Director of the Central Archive of His Holiness and a member of the Advisory Board of the Institute of Tibetan Classics in Montreal, Canada. He is now the Director of the Library of Tibetan Works and Archives in Dharamshala India, and head of the Science Education Project.

Smithsonian works with the Sager Foundation and the Exploratorium to build science capacity in Tibetan monastic communities through the Science for Monks program. The program fulfills a mandate from His Holiness the Dalai Lama to create a mutually beneficial dialogue between Tibetan Buddhist practices and modern science.