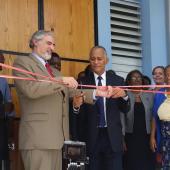 As Under Secretary for History, Art, and Culture, Richard Kurin is responsible for most of Smithsonian’s national museums and a variety of cultural and education programs, as well as several research centers including the Center for Folklife and Cultural Heritage. Richard has served on the U.S. Commission for UNESCO and advised UNESCO on the drafting of the 2003 International Convention for the Safeguarding of the Intangible Cultural Heritage, now ratified by more than 160 nations.

In 2004, Richard worked intimately on developing a Smithsonian Folklife Festival to commemorate the 200th anniversary of Haiti’s independence. Working together on the Haitian festival cemented ties and built a strong trust between Smithsonian and Haitian friends and colleagues. When the devastating 2010 earthquake struck Haiti, Richard reached out to government agencies, arts and cultural organizations and conservation professionals to see how these diverse partners could work together to rescue damaged and at-risk Haitian cultural heritage.

Richard traveled to Port-au-Prince and worked with Haitian counterparts to craft a plan for recovering, rescuing and preserving Haitian cultural heritage. He employed Smithsonian’s power to convene to build partnerships with Haitian, U.S., and international partners around these efforts and established the Haiti Cultural Recovery Project. The project supports and trains Haitians in conservation skills so that they can carry on preserving their own cultural heritage for many years to come.

A former Fulbright-Hays fellow who has conducted most of his research in India and Pakistan, Richard earned his Ph.D. in cultural anthropology from the University of Chicago, and taught at The Johns Hopkins University Nitze School of Advanced International Studies. He first worked for the Smithsonian for the celebration of the Bicentennial of the United States in 1976, and later became director of the Center for Folklife and Cultural Heritage which he headed for two decades. He is the author of The Smithsonian’s History of America in 101 Objects, Reflections of a Cultural Broker: A View from the Smithsonian, Smithsonian Folklife Festival: Culture Of, By, and For the People as well as other books and numerous scholarly articles. In 2015 he was elected to the American Academy of Arts and Sciences.

The Smithsonian Folklife Festival is an international exposition of living cultural heritage annually produced outdoors on the National Mall of the United States by the Smithsonian Institution’s Center for Folklife and Cultural Heritage.