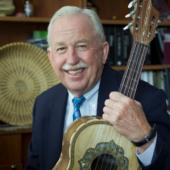 Dan Sheehy was Director and Curator of the nonprofit record label Smithsonian Folkways Recordings and oversaw the Folkways collections of the Ralph Rinzler Folklife Archives and Collections. Smithsonian Folkways boasts an educational Web site offering CDs and downloads (including full liner notes), video mini-documentaries, and lesson plans featuring traditional music from around the world. In June 2015, Dan was named a 2015 National Heritage Fellow by the National Endowment for the Arts, for making “a significant contribution to the preservation and awareness of cultural heritage.” In April of 2016, he was awarded a prestigious John Simon Guggenheim Fellowship.

An ethnomusicologist and folklorist, Dan was appointed curator and director of Smithsonian Folkways in 2000. He is author of Mariachi Music in America: Experiencing Music, Expressing Culture and co-editor of the South America, Mexico, Central America, and the Caribbean volume of the Garland Encyclopedia of World Music. Under Sheehy’s direction, Smithsonian Folkways has published more than 200 recordings, including the 10-volume Music of Central Asia series, the African American Legacy Series (co-sponsored by the Smithsonian’s National Museum of African American History and Culture), and the Tradiciones/Traditions Series of signature music from Latin America and Latino USA.

Before joining Smithsonian in 2000, Dan served as director of Folk & Traditional Arts at the National Endowment for the Arts (1992-2000) and staff ethnomusicologist and assistant director (1978-1992). A former Fulbright-Hays scholar in Veracruz, Mexico, he earned his Ph.D. in ethnomusicology from UCLA.

For more than 10 years, Smithsonian’s Center for Folklife and Cultural Heritage (CFCH) has worked with artisans, local communities, and the Colombian government to document and celebrate the great diversity and beauty of Colombia’s intangible cultural heritage, or living culture.