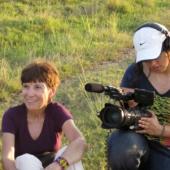 Olivia Cadaval is Curator and Chair of Cultural Research and Education at the Center for Folklife and Cultural Heritage. Since joining the Center in 1988, she has curated numerous Smithsonian Folklife Festival programs including El Rio (2000), México (2010), Colombia: The Nature of Culture (2011), and PERÚ: Pachamama (2015).

In addition to her work with the Festival, Olivia produces curriculum enrichment materials, exhibitions, and online portals, including the bilingual site “Assembling the Festival Program: Colombia.” She has worked extensively on documentation, public programs, and education projects in the Latino community of Washington, D.C.

Her publications include Creating a Latino Identity in the Nation's Capital: The Latino Festival (1998). Olivia has contributed to such publications as Urban Odyssey, Creative Ethnicity, Washington at Home, New York Folklore, the Journal of Folklore Research, and The Public Historian. Olivia holds a Ph.D. in American Studies and Folklife from George Washington University.

For more than 10 years, Smithsonian’s Center for Folklife and Cultural Heritage (CFCH) has worked with artisans, local communities, and the Colombian government to document and celebrate the great diversity and beauty of Colombia’s intangible cultural heritage, or living culture.

The Smithsonian Folklife Festival is an international exposition of living cultural heritage annually produced outdoors on the National Mall of the United States by the Smithsonian Institution’s Center for Folklife and Cultural Heritage.

Crisscrossed with paths connecting communities across geography and history, Peru boasts a stunning vertical landscape that integrates a diversity of ecosystems and cultures.